In Palestine, the constant population increases, estimated annually at 4% according to the Palestinian Central Bureau Statistics (PCBS), and improvements to standards of living as urban development increases, have been reflected in the behaviors and diets of Palestinian citizens, especially within the urban community and city dwellers in the West Bank. This development has increased the amount of solid waste produced (Aliewi and Khatib, 2015). Ensuring effective and sustainable management of solid waste, as well as finding safe ways to dispose it, have become a pressing necessity required, to avoid negative implications for the environment and public health. If neglected, this would impose an obstacle to the sustainable development of infrastructure in the West Bank (Toschinetz and Michelic, 2009). Thus, solid waste management has become one of the most significant social issues in Palestine.

The amount of solid waste generated in Palestine was about 1.59 and 1.4 million tons, or nearly 4,356 and 3,900 tons/day in 2018 and 2019 respectively. Solid waste generation per capita is about 0.9 kg/day in the West Bank and 0.7 in Gaza Strip. The majority (94%) of this waste is collected by municipalities, the United Nations Relief and Works Agency for Palestinian Refugees in the Near East - UNRWA (especially in the refugee camps), and the Joint Service Council for Solid Waste Management in the Governorate of Ramallah and Al-Bireh (JSC) whom’s mission is to increase public awareness regarding solid waste management in addition to planning of a sanitary landfill. The limited number of landfills, limited capacity, and outdated technical strategies for operating the sanitary landfills, have led to haphazard dumping in many areas.

According to the 2020 PCBS figures, the total population in Ramallah city, where SIRCLES Palestinian partner is based, was estimated to be about 41,276 citizens; while in Ramallah governorate, the total population is 347,818 citizens living in 80 districts. In 2016, the municipal waste generated in Ramallah city was estimated to be about 86.5 tons of solid waste per day, with an average of 2.6 kg per person per day, with 60% of that waste recycled (Ramallah Municipality Database, 2016). The total waste generated in 2020 in Ramallah city is approximately 107 tons/day. There are various ways to classify solid waste into main categories like compostable, biodegradable (food waste, animal dung, plants, yard and trees’ waste), recyclable (plastic, metals, glass, paper and cardboard, clothes, certain tires and batteries), inert (from construction and demolition, debris and stones), and hazardous (paints, chemicals, pesticides, aerosols, batteries, some medical waste). 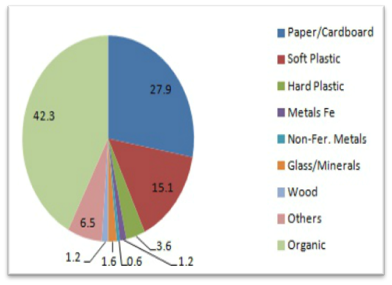 Figure 1 illustrates the composition of the solid waste in the West Bank, 2016

The cost of collection and transportation of solid waste from Ramallah to the Zahrat Al Finjan sanitary landfill, which is about 90 km to the south of Jenin city - is very expensive and constitutes a significant financial burden on the municipality of Ramallah.

Over the last few years, some initiatives and pilot projects that took separating organic waste from municipal waste as an important element of integrated solid waste management were implemented. Selective Collection of the Organic Waste in tourist areas (SCOW), which was funded by the ENPI CBC MED program and implemented by the House of Water and Environment (HWE),  Palestinian partner in SIRCLES, is an example of such a project. The goal of the SCOW project was to develop an innovative and sustainable biowaste management system through effective collection and waste treatment on a decentralized, small scale, with composting plants located near biowaste generation sites. One composting plant was established at Beitello village, some 19 km to the north of Ramallah city. This experience can serve for the implementation of the activities foreseen within SIRCLES and reduce a significant chunk of the Ramallah municipality’s solid waste transportation costs.

The estimated amount of organic waste generated by the ten hotels and restaurants targeted in SIRCLES project is about 850 tons/year, with   450 – 500 tons of compost expected to be produced annually. In line with the State of Palestine’s policy and strategy to enhance the production of organic fertilizers, there are currently 14 composting plants in the West Bank.

The separated organic waste shall be delivered to the composting facility in Beitello, enhancing the efficiency and sustainability of compost production, which is also in line with Palestinian compost policy standards.

In summary, solid waste is a major concern in Palestinian society, and it poses many threats and obstacles, not only for public health and the environment, but also for the economy. This project would yield many benefits and solutions simultaneously, as illustrated above. In addition, slow and certain adoption of sustainable practices, such as organic farming and capacity building to the beneficiaries, will be achieved by establishing a demonstration field.