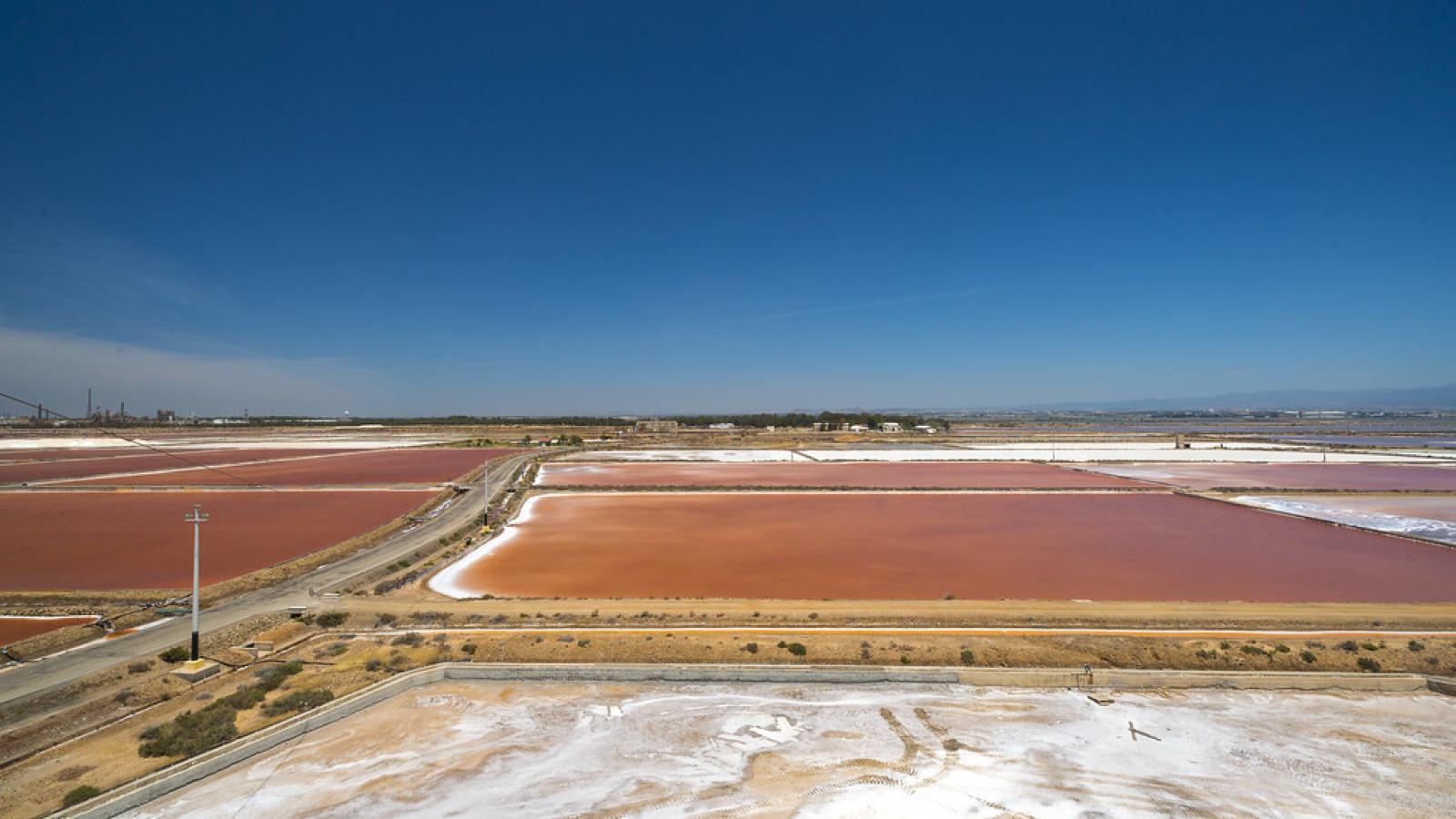 It is the dunialella seaweed that warns the salt workers about the time of harvest. Only the dunialella survives the concentration reached in the basins. In September its pigment invades them making the saltpans a vast mirror filled with the colors of the sunset. All around is the autumn of the cities that have grown up on the coast, on the labor of the “sea peasants”. For millennia, ships have carried in their holds the “white gold”, born thanks to the sun and wind beating on the imprisoned water. A common season, till November, a single, simple process marked by the endless small nuances in practices and languages, and the historical passage from traditional to industrial collection. Numerous declensions of a common Mediterranean and Italian history.

Today the Cervia salt pan covers 827 hectares and consists of over 50 basins, surrounded by a sixteen kilometers canal that allows water to enter and exit the system. Production techniques have evolved over the centuries, passing from the simple collection of precipitated salt to the artisanal multiple collection system, replaced in 1959 by the industrial one. Even today, however, we remember the ancient names that used by the salt workers made up the grammar of the harvest. The evaporation basins were called morari. From here the water flowed into smaller areas, where the salinity increased rapidly. Through the channel that still surrounds the salt pan, the water passed through basins of progressively smaller size, up to the cavedini, which were ten meters long and five wide. The salt was then piled up with wooden stalks called gavari. Drained from the "mother waters" it was moved by wheelbarrows to a threshing floor called tomba, which the salt workers covered with mats to avoid the damage possibly produced by the autumn rains. 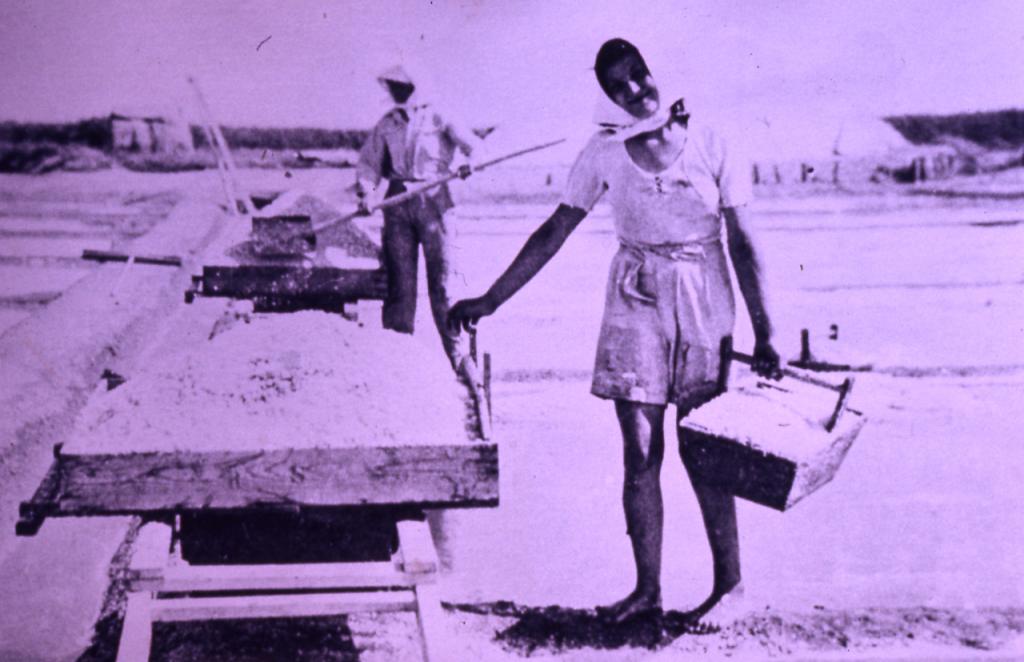 Going down the Adriatic coast we find in Puglia the Margherita di Savoia salt pans, already known in Roman times. For centuries the high tides invaded the basin of the ancient lake Salpi, and as the water evaporated they naturally left the salt crystals on the bottom. The vastness of the Margherita di Savoia salt pans (the largest in Europe) suggested in modern times the transition to a mechanized harvesting process. Self-propelled harvesting machines up to 200 meters long stretched along the entire length of the basin. These devices proceeded perpendicularly across the basin thanks to two rail-tubes, at the center of which a mechanism triggered the rotary motion of a belt that received the salt from a bulldozer and transported the salt to one of the two norias (sort of mills) located at the ends of the huge machine.

From the norias, which housed a control box, another vertical belt carried the salt towards an opening on the top. This conveyed the salt inside small railway trolleys, which deposited the product in an unloading hole. From here other tapes led the salt onto an overhead crane, from the top of which, falling, the white gold created a mountain twenty meters high and a few hundred long. Today the market has forced the collection to go from a seasonal to a multi-year rhythm. Harvesting machines have significantly decreased in size. The number of employees is also lower. The latest innovation in the harvesting process has been called travoni di sale, “salt paths” made necessary by the continuous passage of trucks over the saline encrustation, which ended up preventing the transport of salt from the basins area. The "travoni" are salt tracks created by excavators that allow an easier and less harmful passage towards the stacking yards. Today the average annual production for the Margherita di Savoia salt works is 5,500,000 tons. 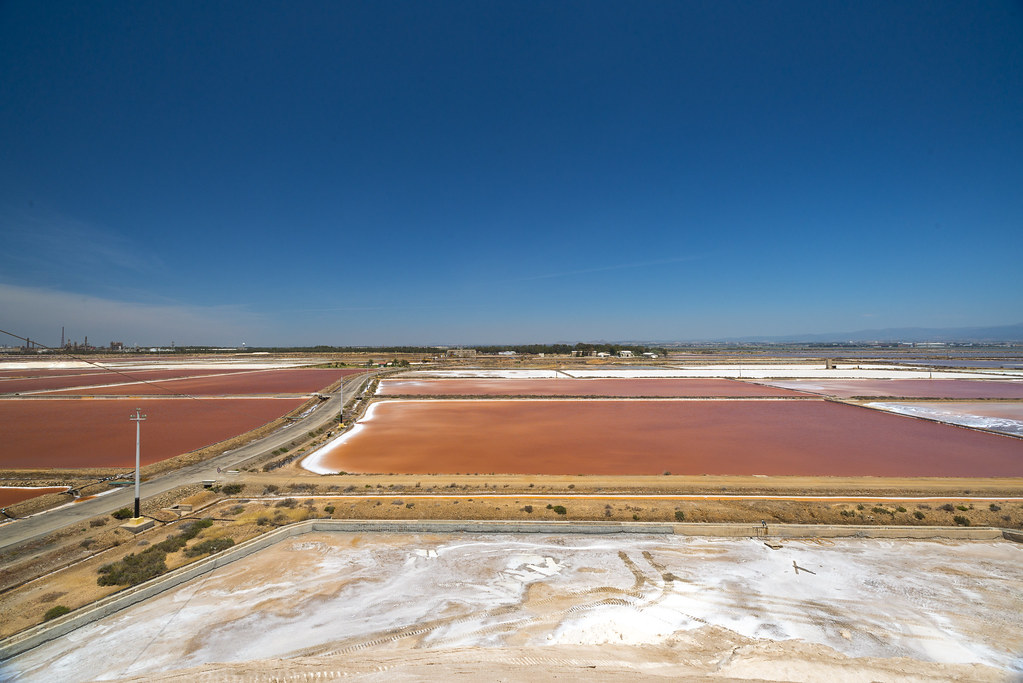 The Conti Vecchi salt pans, born in the 1930s in the Molentargius pond, in Gulf of Cagliari, also witnessed the transition from artisanal to industrial multiple collection. A very hard job, carried out with shovel and pickaxe by 1500 workers, many of them seasonal. Inside the salting basins the sea peasants proceeded to the operations of atellaggio or atellatura, the collection of the precipitated salt in small accumulations which were then transported with wheelbarrows towards the large farmyard. Shovel and pickaxe were later replaced by an “harvesting machine”, invented by local salt workers. This was capable of crossing the basins like light tanks, collecting and spitting out the salt, which accumulated on the docks. Today the atellaggio is carried out with bulldozers and by no more than forty workers. A job of great precision: the flooring of the salting pool is made of waterproof clay. As in agriculture, you must absolutely avoid damaging the soil. The bulldozer must therefore "brush" the bottom of the tanks when it carvels the precipitated salt and scrapes to take it away. Significant damage to the pavement would make it necessary to leave the field "fallow". The salt collected by the bulldozers is loaded onto trucks that release it into the large yard, where a belt transports it to the sieve. Cleaned of clay, it is taken over by the derrick, a mechanical arm that carries it to the top of the mountain, cradle of the new salt.

The industrial system spontaneously tended to standardize practices and languages. But until the 1980s in the salt pans of Trapani the harvest workers were divided into three groups, those involved in the rumpitina, those specialized in the arrunzatina, and the collectors team, called venna. The first group took care of scraping the salt precipitated on the bottom. The crushed crust was dried by the water and, to facilitate the emptying of the salt basin, "cut" and pushed to flow into the drainage channels, which thanks to the slope converged towards a mass point called spiatura. At the cross-shaped collection point, the salt crust was divided into small square portions and subsequently grouped into small piles. Once the salt has been stacked in small piles, it is time for the venna team to intervene. This, with the help of a particular type of spades and wheelbarrows, collects the piles and takes them to the conveyor belt on the edge of the pool, which piles them on the farmyard. The work was commissioned by the piece, and had as an essential reference a specific unit of measure for salt corresponding to 24 baskets, about 500 kilos. The counting was performed with the help of a small square of wood called tagghia, where ten holes were made on each side. On the holes, by means of wooden strips called 'nzippe, the units were noted on one side and the tens on the other. With all as witnesses, the calculation started, and in order to avoid troubles between the different groups, the sum became a chant, which is still known today as the "song of the salt workers".

The MedArtSal project, of which MEDSEA is a partner, is funded by the ENI CBC MED 2014-2020 Programme, with a total budget of 3.2 million euros and a contribution from the European Union of 2.9 million. It will last for 36 months.

The article first appeared on MedSea website, partner of the project MedArtSal, at the following link: http://www.medseafoundation.org/index.php/en/news-int-eng/432-autumn-it-s-time-of-harvest-for-the-sea-peasants