MedArtSal: encouraging a social demand to preserve the saltscapes in Spain

ENCOURAGING A SOCIAL DEMAND TO PRESERVE THE SALTSCAPES IN SPAIN

Salinas are an example of the complexity of Mediterranean landscapes, in which human, cultural and natural features are intimately linked and at the same time reciprocally dependent.

Across the world, a variety of saltpans and sites used to produce salt are disappearing, mainly due to changes in the society. Despite the lack of comprehensive studies to prove this abandonment, there are some partial inventories of the current active salinas

Coastal Salinas are areas catalogued in European Directive 92/43/EEC, of 21 May 1992, on the conservation of natural habitats and of wild fauna and flora (Habitats Directive) as Priority Habitats of Community Interest due to their rarity and degree of threat (1150* coastal lagoons). Therefore, the Member States are obliged to ensure their conservation status. In Spain, this responsibility falls on the regional governments, which hold competences in the field of conservation and environmental management.

In Spain and other parts of the Mediterranean, coastal salt marshes support an extensive heritage - both tangible and intangible-, including history, biodiversity, ecosystem services, environmental education, gastronomy, R+D+I... Nevertheless, we should not forget that their natural and structural configuration requires human presence and management to survive. 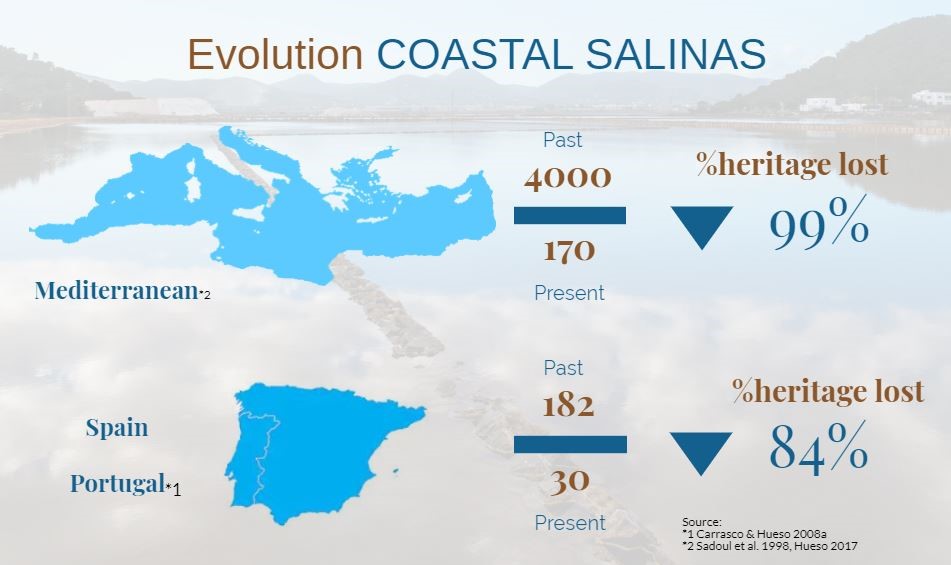 Among the different issues faced by salt making sites, salt depreciation, mass production, the lack of generational change stand out as causes of the abandonment of traditional salt farms. If salinas are abandoned, waters will stagnate and eventually dry out, meaning that all these ecological niches will be lost.

Overview of Iberian salinas with some degree of patrimonialization

Source: Hueso, K. (2017). Salt in our veins. The patrimonialization processes of artisanal salt and saltscapes in Europe and their contribution to local development (PhD thesis). Universitat de Barcelona, Barcelona, España. http://hdl.handle.net/2445/116409, and own elaboration.

In order to maintain and make profitable the artisanal salinas, traditional producers need to adapt to the new times by combining it with other economic activities (tourism, new salt products) or partnering with different companies at local level (restaurants, local food businesses).

Consumers can play an important role, for example, by appreciating the value of provided services, understanding that by buying artisanal salt they not only acquire a product, but contribute to preserving a space, a heritage and an identity.

In terms of legislation, in Spain, to differ salt extracted by traditional from the industrial processes, together with more flexible fees and taxes framework would have a beneficial impact

Learn more about the MedArtSal project.