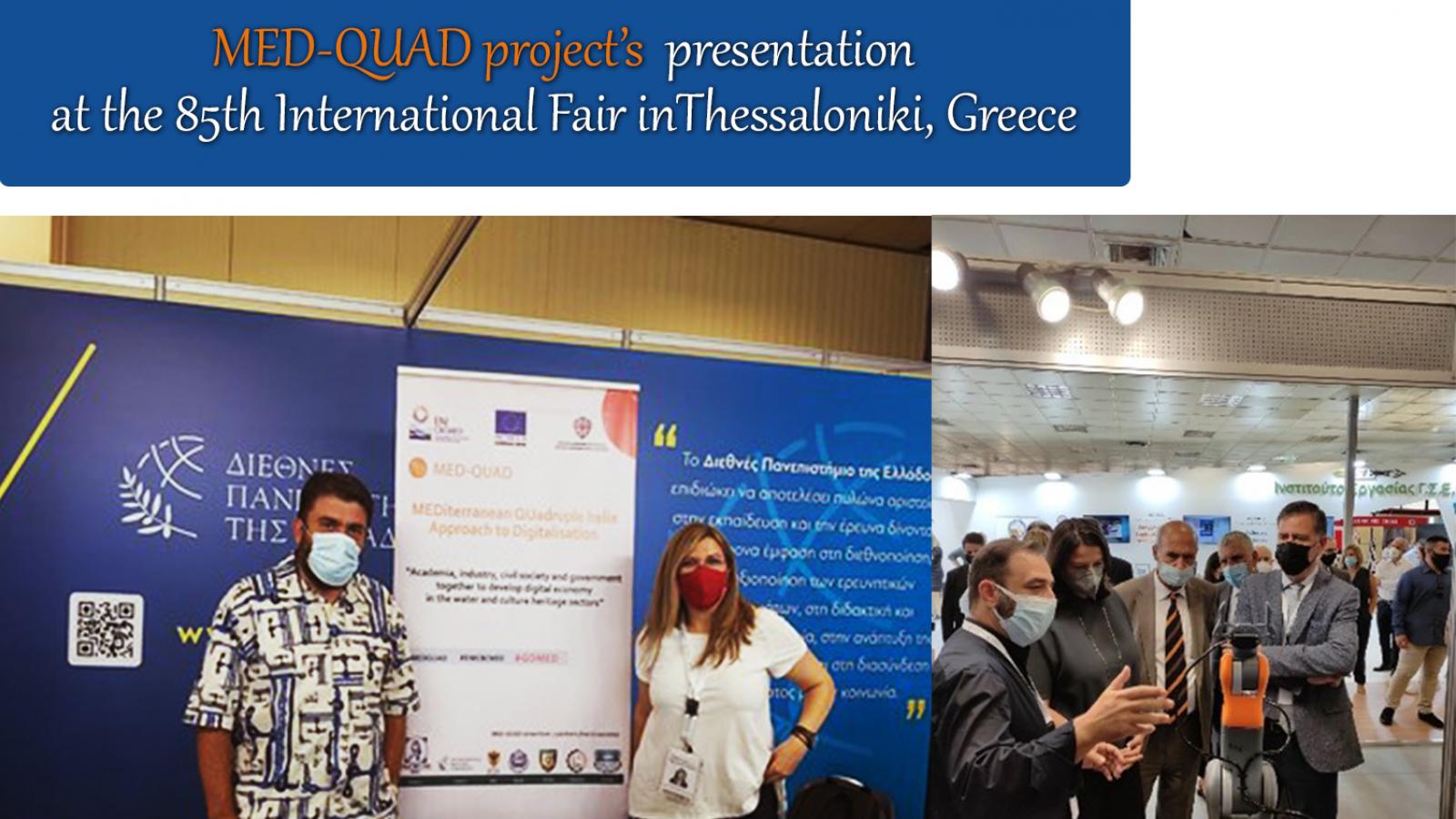 The International Hellenic University of Greece (IHU), partner of the project "MEDiterranean QUadruple helix Approach to Digitalization" (MED-QUAD) and Epimorfotiki Kilkis (Lead Beneficiary of the project, Greece), participated in the 85th Thessaloniki International Fair (TIF),which took place between 11th and 19th of September 2021. At the largest exhibition event in Greece, which was attended by many people from all over Europe, the partners of the MED-QUAD project had the opportunity to promote the transnational cooperation in the Mediterranean implemented with EU funding under the ENI CBC Med Program.

This year's TIF event aims to contribute to the redefining of the needs of Greek society, to boost its historical memory and to bring the citizens closer with new digital services and technologies, innovations and Greek production. The main purpose of the MED-QUAD project, which is in line with the objectives that the TIF organization wants to cover, is related to the practical application of the "Quadruple Helix Approach" theory in the field of innovation and sustainable local development through the cooperation and interaction of the 4 key factors of innovation, namely universities / research centers, businesses, (local) administration and society.

IHU presented to the public the MED-QUAD project (which includes the participation of 5 other academic bodies from the Mediterranean area and specifically Italy, Egypt, Tunisia, Palestine and Jordan) as well as the international programs implemented by the university. Throughout the exhibition, in the booth of the Greek partners of the project, the promotional video of MED-QUAD was broadcasted where it captured the attention of the visitors.

The scientific manager of IHU for the MED-QUAD project, associate professor Dr. Kassianidis Panagiotis, through the complete presentation of the project, answered various key questions from the students, teachers and visitors. The booth was visited by hundreds of people, among others, important people in the field of decision making such as the Minister of Education, the Deputy Minister of Education, the President of the Administration, the Dean of the School and the President of the Department.

The Greek partners made a special reference to the pioneering living labs for "Smart Water Use Applications" (SWUAP) and "Applied Research for the Utilization of Cultural Heritage" (ARCHEO). The Living Labs are a space "open" to the city and will be created to highlight the effectiveness of the operation of the 'Quadruple Helix’ with the harmonized and coordinated synergy of science, entrepreneurship, administration and the human factor, through different pillars: the element of water and cultural heritage. It is worth mentioning that the cross-border Living Lab SWUAP will be created in Kilkis, in the hall of the building of the International Hellenic University of Greece/Kilkis department, in collaboration with the Municipality of Kilkis and the Municipal Water Supply and Sewerage Company of Kilkis.

Closing the presentation of the project, the Greek partners of the MED-QUAD project discussed in groups with the public and especially with young students, in order to promote the concept of "socially aware university" and strengthen collaborative relationships. At this point it is noted that the vision of the MED-QUAD project is to make universities "Socially Aware" and together with businesses and local governments, to fully meet their role as institutions, operating not just in the city / local community but "For" the city, that is, for the social benefit of the citizens.