On Europe Day, once again, the ENI CBC Med programme gave the floor to young people from both shores of the Mediterranean to share their concerns and their vision for the future.

The priorities seem to be the same as those tackled by other young people last year, namely jobs, climate change, human rights and the fight against corruption, but the tone has changed. We are just emerging from a pandemic that has shaken everyone for the past two years and here we are facing new challenges: a striking inflation and the war in Ukraine.

In this context, it is more than ever necessary to recall the importance of the European Neighborhood Policy which main objective is to maintain peace and stability. This was highlighted by the secretary for the EU and External Relations of the region of Valencia in Spain, Mr. Joan Callabuig, in his opening speech of the event which finally took place face-to-face on Monday 9th May 2022 at the Palau de les Communications in Valencia, Spain.

Young Europeans and young people from neighbouring Mediterranean countries debated to renew this fact: we have more in common than differences.

As Susana Sanz, professor at Cardenal Herrera University, pointed out, she definitely feels closer to a Tunisian person than to any other citizen from northern Europe. Hence, the comment of Mr.Andrés Perelló, director of Casa Mediterraneo in Alicante: it is time to rediscover the Mediterranean

One of the main themes that marked this debate between these 6 young people and the public was access to job.

Fawwaz Al Manassra, a young Palestinian from Gaza, currently lives in Madrid and studies medicine. He recalled that the official unemployment rate in his country is 27% and that paradoxically, the longer one pursues studies, the higher is the probability of finding oneself unemployed. He also pointed out that unemployment rate for women is double than those for men. He recognized that in his country, there would be more need for technical and vocational training because there are more job opportunities there than pursuing long university degrees.

Paradoxically, the longer one pursues studies, the higher is the probability of finding oneself unemployed
Fawaz Al Manassra, Palestinian from Gaza 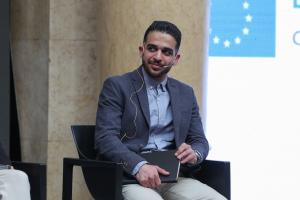 Oriane Petit, a French student currently on an Erasmus exchange in Valencia, emphasized on the need for technical and vocational training too. She also considers that there is an increasing need for practical internships and experiences outside the formal education system. These experiences can make the difference when hiring.

Ana Abou-Arraj Awad, a Spanish lady from Lebanese origin, confirmed the importance of experiences acquired outside the academic curriculum. According to her, employers are increasingly asking them for skills and abilities that they do not acquire through their formal education.

As for Josep Pastor, a Spanish guy from Valencia, is aware of the advantage he has when he compares himself to a young Palestinian as he has the chance to live in a stable country. That said, in the changing and globalized world in which we live, he finds himself competing in the labour market with the rest of the world and this is hard.

Paola Ciaccio, an Italian lady, said that the job market is more and more demanding. She finds it difficult to make plans for her future. This feeling is widely shared by her other fellows in the debate. She added that she is also quite aware of the value of her work and therefore less ready to accept any jobs with bad conditions.

The job market is more and more demanding. We are also aware of the value of our work and don´t want to accept jobs with bad conditions.
Paola Ciaccio, Italian from Rome

Whether local, regional or European, these young people feel misunderstood by public institutions. Moreover, they have the impression of not being taken seriously. Regarding climate change, they are fully aware of the role they can play but also remind that they are not the only stakeholders and governments are not doing enough.

Regarding the war in Ukraine, they would like to see more rapid and effective actions from the institutional side. If on an individual scale, we have managed to organize ourselves and show solidarity towards Ukrainians, why our representatives won´t do the same? emphasized Nouha Abou, a Spanish girl from Syrian and Lebanese origin.

This debate: an exercise of live democracy