Ever since my ceremonious launch in September 2019 in Thessaloniki my creators have been keeping my wheels turning at full speed.

Alas, the third project meeting which was scheduled to be held in Tunis could not be organized as a physical get-together of my co-creators. Yet, the atmosphere of the virtual meeting organized by CERTH on 23 and 24 September 2020 captivated me from the very start.

Dr. Konstantinos Plakas, my project manager, was clearly beaming when he ticked off the outputs that were on the to-be-achieved list for the first twelve months since my launch.

Conscious of the urgency to change the paradigm on wastewater treatment and reuse, my co-creators drew up strategies aimed at decision-makers and public entities involved with the use of non-conventional water resources.

These strategies draw on a multitude of inputs which include an in-depth review of the regulatory framework, published studies and reports, as well as 15 one-to-one interviews with high-level actors in the water and sanitation sector in Lebanon, Spain and Tunisia. This achievement was facilitated through the adoption of a SWOT analysis. In this approach, inputs are organized as depicting either Strengths, Weaknesses, Opportunities or Threats (SWOT).

Consequently, the proposed strategies are formulated in a manner which duly: 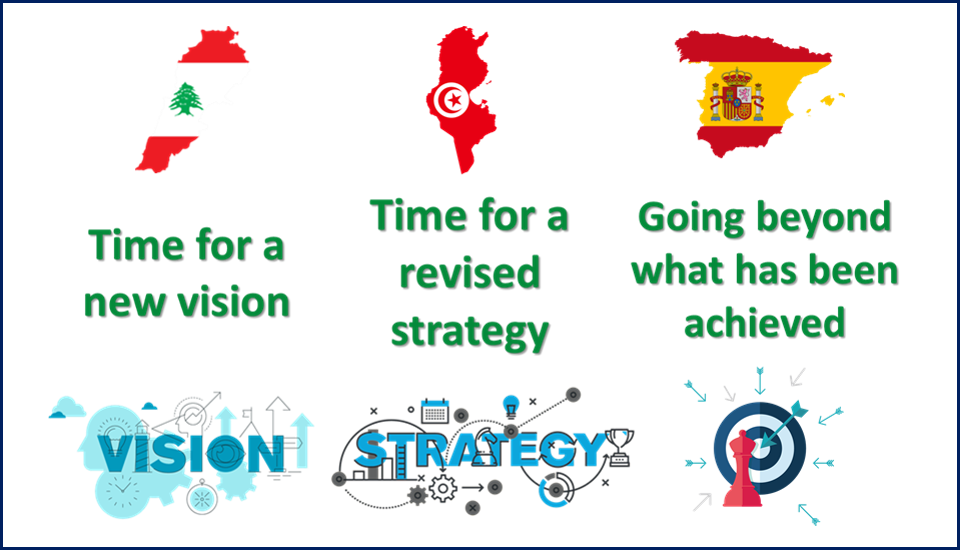 These distinct outcomes for Lebanon, Tunisia and Spain, were then presented for feedback in a first series of stakeholder workshops. A target was set of having 25 water stakeholders in each of the three events.

“AQUACYCLE shining in the news in Lebanon” was the well-deserved achievement of the Lebanese University team which succeeded in attracting an impressive media coverage of their event in Tripoli which took place on 25 July 2020.

As evidenced by the testimonies of the participants during the event, as well as the earlier interviews, Lebanon’s water and sanitation situation is in dire straits.

A big thumbs up to the Dr. Ahmad ElMoll, Dr. Tawfik Al-Nabulsi and Dr. Fatima Yahya for already having seized this feedback to make a further, emphatic call on all public entities in Lebanon to come together and draw up standards and guidelines for the safe reuse of treated wastewater in agriculture!

Whereas the proposed strategy calls for a radically new vision in Lebanon’s water and sanitation sector, a revised strategy is called for in Tunisia. Despite extensive expertise and a long tradition of wastewater treatment, the actual use of treated domestic effluent in Tunisia remains limited.

Congratulations to the CITET and CERTE teams for attracting representatives from no less than 5 ministries and 6 entities involved with the use of non-conventional resources to the event which took place on 22 September 2020.

The CITET and CERTE teamleaders, Dr. Hamadi Kallali and Mr. Fadhel M’Hiri, conveyed the need for a revised strategy on respectively the RTCI and RTC radio channels. I definitely recommend to watch the video clip that brings interviews (in Arabic) also with Ms Khitem Mensi, project manager on behalf of CITET. This clip fascinated me as it brought glimpses of the thematic gardens which are expertly maintained by the Ecological Group for Sustainable Development (Groupement de Développement Agricole, GDA Sidi Amor). Among other, the site boasts a medicinal garden, a forest garden, a cultural garden and a rose garden.

Regretfully unable to organize a physical get-together, PSA-CIEMAT and ESAMUR organized a webinar. For sure, online meetings do not offer the same opportunity to exchange views as those brought by a coffee break or a light lunch as were served in Tripoli and Tunis. But then again, the organizers made it into a truly memorable event. No less than 70 water stakeholders in Spain joined the webinar on 8 October 2020. I hear you ask me what would have been the reason this amazing achievement? The hosts, Dr. Isabel Oller and Pedro Simón had invited keynote presentations on the latest advances in each of the 3 components that make up the eco-innovative APOC technology: Anaerobic digestion, Photocatalytic Oxidation and Constructed Wetland.

These advances have since been taken up in the design specifications for the three pilot installations that are foreseen in Lebanon, Spain and Tunisia.

Yes, I feel confident my wish to make a physical appearance around the Mediterranean in 2021 will come true !!!

Where I wish to be making my physical appearance in 2021!