On June 24, MEDISS team presented in Arborea the important results achieved with the inauguration of the Italian pilot plant.

MEDISS is coordinated in Italy by the partnership formed by the Sardinian Water Board (ENAS Ente Acque della Sardegna) and CRENoS Centre for Economic Research North South- University of Cagliari, in collaboration with the Cooperativa Produttori Arborea and the support of the municipality of Arborea and LAORE Sardegna, the Regional Agency for Agricultural Development.

The press conference was an opportunity to explain in detail the innovative concept of the experimental facility. The extraction of fertilizers from the sludge of the wastewater treatment plants of the Cooperativa Produttori Arborea is the heart of the trial activities.

In the pilot area of Arborea, MEDISS aims to re-use sludge from livestock facilities for the production of "clean" fertilisers, using advanced stripping technology, in a Nitrate Vulnerable Zone (NVZ).

NVZ:  namely areas likely to contribute to surface or ground water contamination of a specific minimum of nitrate (NO3). Within the NVZs, specific mandatory protection measures had to be adopted by farmers and a limit of 170 kg ha−1 year−1 of nitrogen (N) from organic manure was established. Furthermore, within the NVZs, Member States of the EU had to propose a set of measures to be implemented on a voluntary basis, mainly regarding the periods and weather conditions for fertiliser application. European farmers operating in NVZs are obliged to respect compulsory measures to receive the subsidies provided for the cross-compliance system of the Common Agriculture Policy and individual benefits are reduced proportionally to any detected non compliance to NVZs measures.

The pilot plant, tested for the first time in Italy and produced by the Dutch company Bluetec, treats digestate from the Cooperative's zootechnical waste-to-energy plant. Ammonia stripping for fertiliser production was studied in 2012 by the Dutch EAWAG Aquatic Institute and is operational at the Yverdon-les-Bains plant (CH, 2016), but a test at Italian level has never been carried out. Using membrane filtration units capable of effectively removing ammonia from wastewater flows, it converts it into ammonium sulphate, a fertiliser widely used in agriculture. In addition, the technology allows the coarse portion of the wastewater to be retained and therefore also particles that are potentially harmful to the environment (water, soil, greenery, etc.). 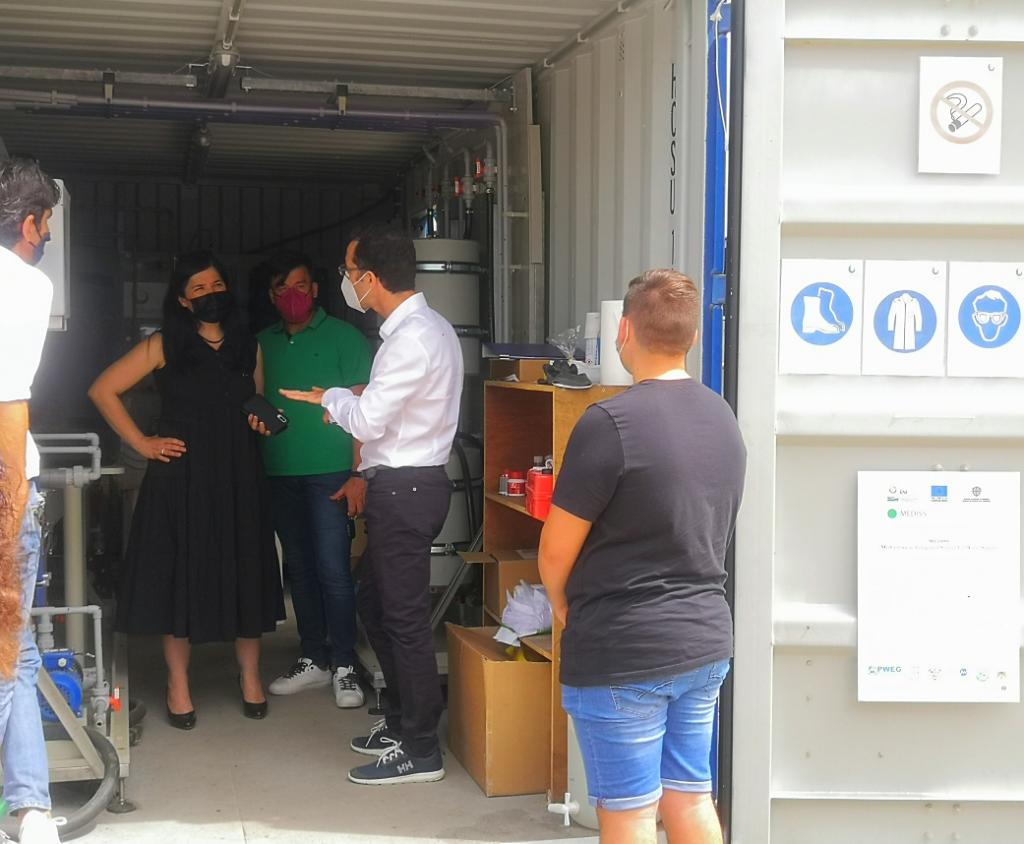 A monitoring protocol studies the quality of the effluent and the "fertiliser" product at the various stages of the process, to check its impact on water and soil, which has already been investigated by the Sardinian competent territorial bodies (ARPAS, LAORE, AGRIS, etc.) and universities.

The potential contribution in terms of nitrate load reduction in Arborea can be a significant pilot experience for other areas facing very similar problems. An essential role in disseminating technological innovation will be played by an awareness-raising programme, specifically designed to facilitate the co-planning of shared solutions to the issue of water pollution.

The context in which MEDISS is acting

Limited water availability is experienced by many countries in the Mediterranean area, even with considerable differences between them.

Mediss project aims at reusing wastewater treated with advanced technologies, mixing it with fresh groundwater or rainwater. It focuses on areas where there is an obvious shortage of water or where significant withdrawals stressed the aquifers and let to the salinisation of waters. Furthermore, the project will contribute, in the long term, to a sustainable water balance in MEDISS areas, increasing resilience to water stress and climate change.

Long-term expected project results will be reduced pressure on primary water resources and decreased costs of water supply. At the same time, increased productivity and crop diversification will strengthen food security and increase farmers' incomes. Local communities and institutions will benefit from project results thanks to the network of professionals/experts of the MEDISS Project promoting the exchange of experiences and good practices at the international level.