On 19th June and 13th July, Italian team of ENI CBC Med BEEP project performed the geometric architectural survey of the Palazzo del Clementino.
They used the 3D laser scanner method applying an instrument that acquires the position of millions of points through successive scans, which make and define the surface of the surrounding objects with very high speed and precision. The result of this scan is a 3D point cloud that accurately reproduces the real object.

Two different types of laser scanners have been employed:

The reasons for choosing this survey methodology are related to the connotation of the 3D point cloud. The points have information of a geometric nature, as each of them has spatial and georeferenced coordinates, and of a colorimetric character, since every point has a relative color obtained from a photo taken by the instrument during the scan.

The first feature is useful for the type of modeling that will be carried out, i.e. Heritage Building Information Modeling (HBIM). The point cloud is used as a basis for the modeling process by "tracing" the surfaces generated by the points. The result is a 3D twin model very faithful to the existing building, that contains objects filled with various kinds of information updatable any time.
The second one allows to know the state of conservation of the property, including the cracking and the level of deterioration, and it’s useful for keeping track of changes and restoration works carried out over time. 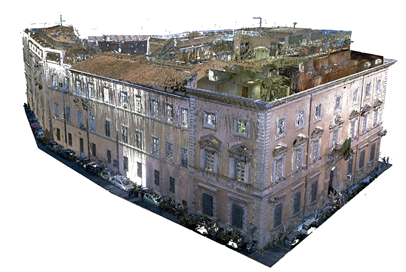 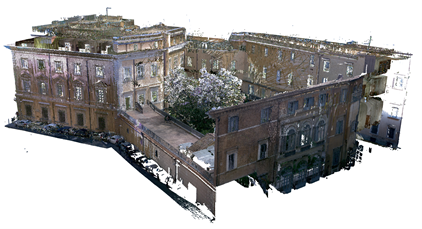 About the BEEP project:

BEEP project aims at strengthening the use of Building Information Modelling (BIM) to enhance energy efficiency in buildings. The testing of this emerging technology on built heritage will be performed to demonstrate its scalability to the entire building stock. The project will provide public administrations with a powerful method for the energy rehabilitation of public buildings to be supported with private funds through the Energy Performance Contracting (*). The project main outcome will be an innovative methodology based on the integration of emerging technologies tested on 9 heritage public buildings located in Italy, Spain, Cyprus, Jordan, Palestine, Lebanon, and Egypt.