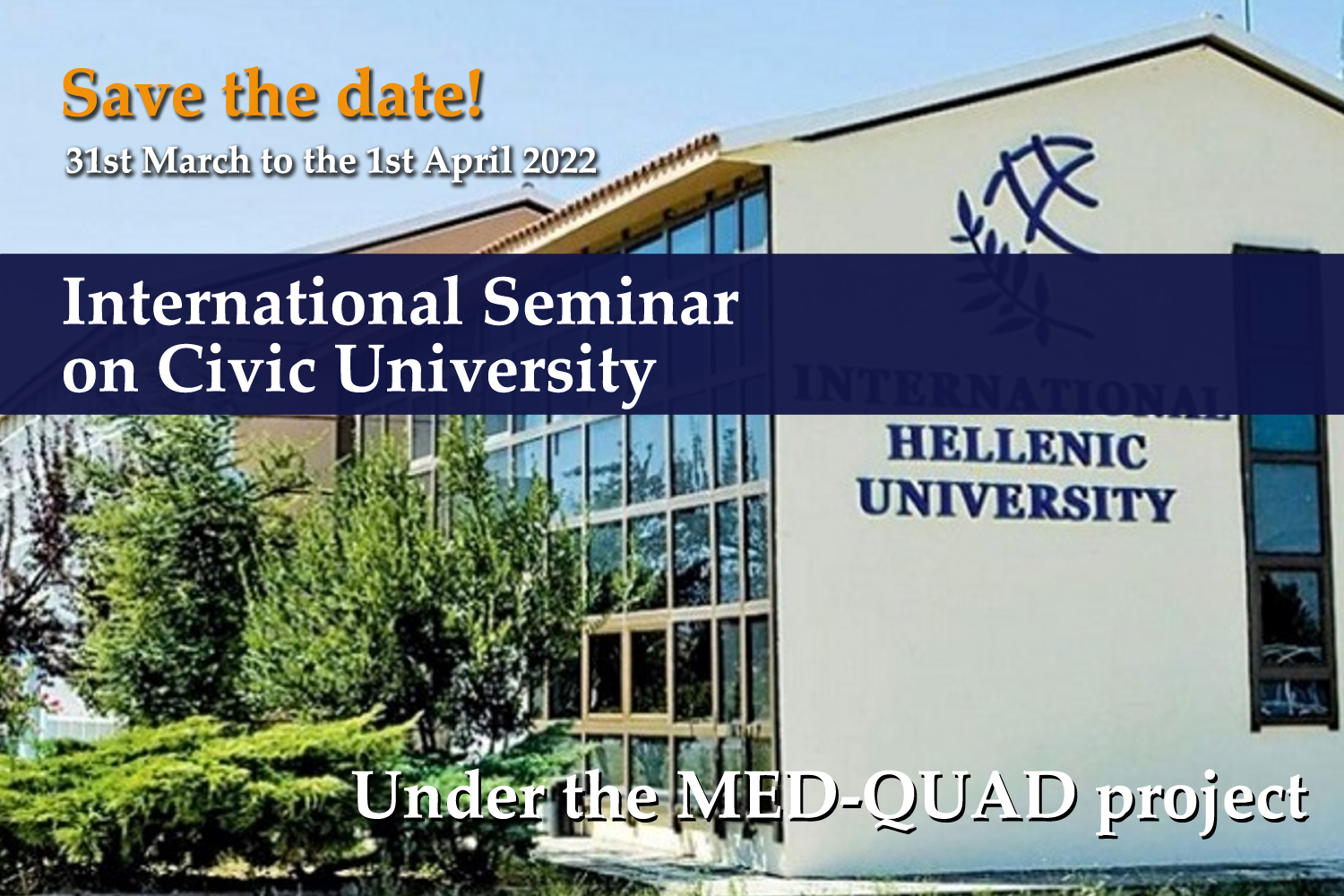 MED-QUAD in Greece organises an international seminar on Civic University

International Hellenic University (I.H.U.), partner of the MEDiterranean QUadruple helix Approach to Digitalisation project, with the project Lead Beneficiary Epimorfotiki Kilkis, organizes an International Seminar on Civic University on 31st March to the 1st April 2022, 16.00 pm to 20.00 pm Greek time, in Kilkis, Greece. The seminar is an opportunity to open dialogue and exchange opinions about the civic university.

The aim of the thematic seminar is the analysis and planning of the role, tasks and responsibilities of the Civic University in the frame of the Quadruple Helix model for innovation. The role of the Civic University will be presented and analyzed from the perspective of the six universities participating in the project. The purpose of the seminar is to inform and give the opportunity to the participants (teachers, students, university authorities, municipalities, SMEs, start-ups, citizens) to interact during the seminar and exchange views on how the role of the civic university is formed in the Mediterranean.

The two main aspects that will be discussed in the seminar are:

In the MED-QUAD project, in addition to the seven core partners, which consist of the coordinating partner Epimorfotiki Kilkis sm llc (Greece) and the academic institutions: International Hellenic University (Greece), University of L'Aquila (Italy), Arab Academy for Science, Technology and Maritime Transport - AASTMT (Egypt), Al-Balqa 'Applied University - BAU (Jordan), Palestine Polytechnic University - PPU (Palestine), University of Sousse (Tunisia), six associated partners from the participating countries will actively participate in a supporting role. Representatives of the partners will have the opportunity to attend in person the international seminar that will take place in Kilkis (Greece); however, the public from Greece and abroad can also participate online via YouTube.

Attendees from academia, industry, intellectuals, government officials, developers, and postgraduate students from Mediterranean countries are invited to get to know MED-QUAD project and talk about the role of Civic University!