Discover the many facets of a professional fisherman: interview with Alexandre Lucchini 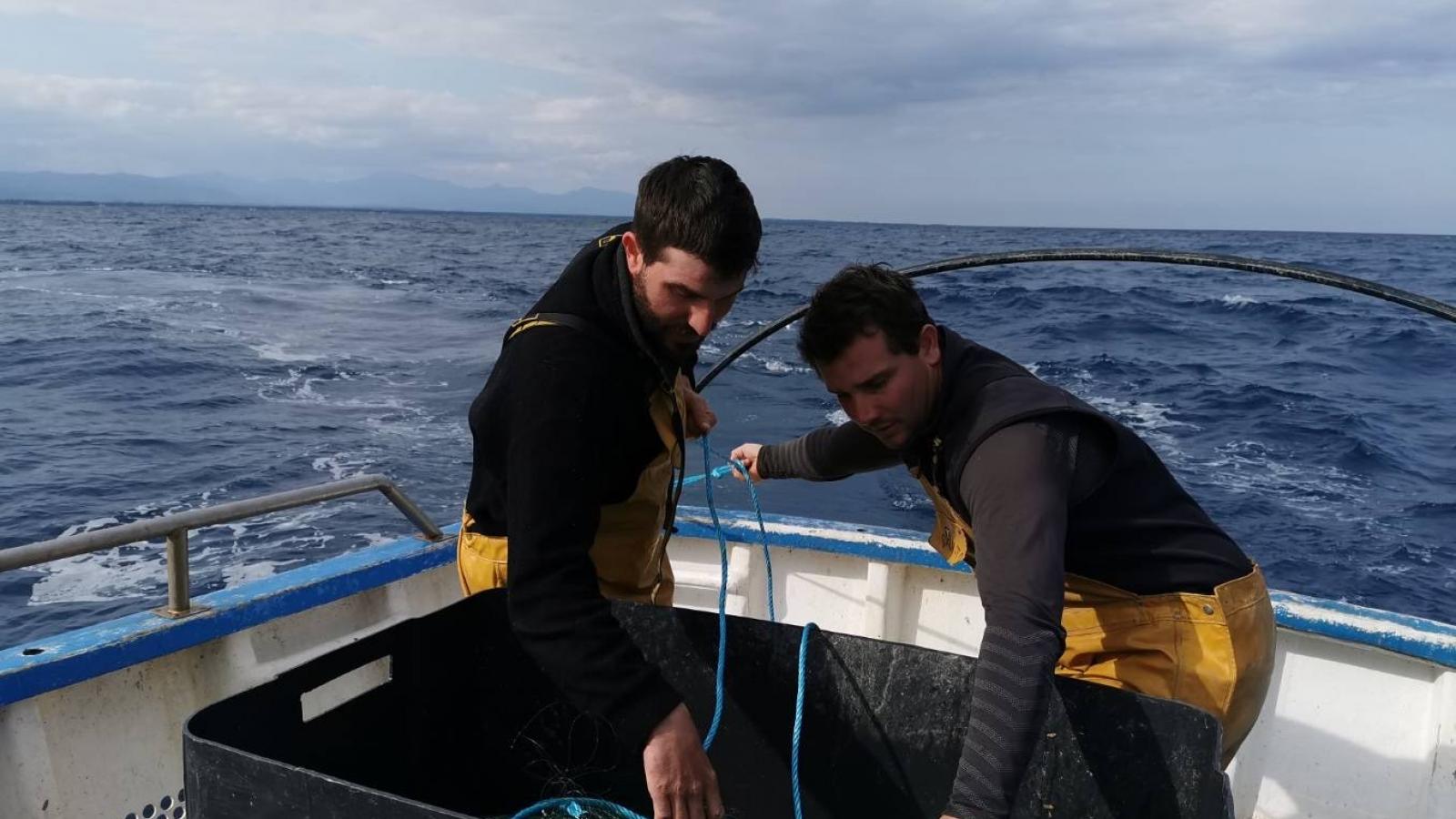 Being a fisherman in the Mediterranean: a family business?

Alexandre Lucchini, fisherman since a year in Solenzara in the south of Corsica, took over his father's boat, works with his little brother who is a sailor and his mother who helps them with the administrative tasks and manages their fish shop. Fishing in the Mediterranean, a family business? It seems so.

Between the very restrictive European regulations, the bureaucratic and slowness of the national administration and bankers who are reluctant to grant loans to young fishermen, few young people have the desire and the means to embark on this profession.

If we add to this an inflexible training system which obliges students from maritime high schools to do their internships outside the fishing season, we take away the motivation to spark the interest for the job. Traineeships take place in winter, a period when most of the work consists of maintaining the equipment and the trainees cannot go fishing. However, without transmitting this passion for fishing, there is little reason to want to start this adventure.

With an average age of 55 years old, Corsican fishermen continue to work once they retire, for lack of successors. At this rate, professional fishermen in Corsica are at risk of disappearing.

Overview of the life of a Mediterranean professional fisherman

Alexandre uses 4 fishing techniques which he distributes according to the seasonality of the species and the tourist season. With his brother, sailor on his boat and skipper of another smaller boat, they complement each other. He takes care of the offshore fish and his brother takes care of the land fishing. Thus, they cover a wider area and have access to a greater variety of species.

First, there is octopus fishing in a pot, an ancestral technique, already used by the Greeks. Then, trap fishing for lobster to avoid parasitic catches. After that, we move on to pelagic fish (tuna, swordfish) but for that, you have to obtain special fishing licenses, the famous European Fishing Authorizations (AEP). Finally, before the season, they use the net to catch other types of fishes.

The day starts very early. We are in the Mediterranean and temperatures are getting higher and higher with climate change. Their boats are not brand new, and they do not have a refrigeration system, hence the importance of starting early in the morning. Back to the port, most of their catch is resold to wholesalers and through direct sales, and a smaller portion is resold to restaurants. 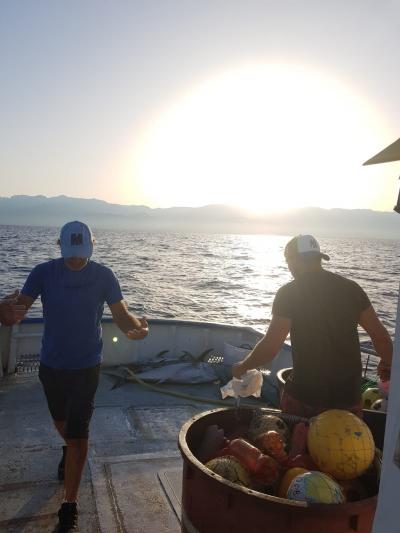 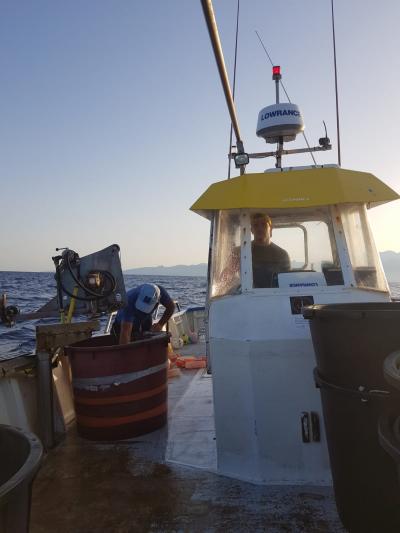 The challenges of the fisherman 2.0

A Corsican fisherman in 2022 has to face a lot of problems: lack of resources due to overfishing, lack of human resources (not enough sailors and administrative assistants), unfair competition with recreational fishing to name a few.

Nowadays, the administrative burden for a fisherman is such that he must either give up fishing one or two days a week to ensure this office work, or to recruit a person to take care of it. He has to fill forms for traceability, declarations, accounting. We must not forget the logbooks, a kind of history of their fishing over the season, which they have to fill in every day or every week depending on the size of the boat and within 24 to 48 hours. In these logbooks, they must fill in three-letter codes, set by the European Union, to indicate the species, their weight, the quantity caught, the quantity rejected. These data are used to monitor the health of the species and  particularly to set quotas by species on the basis of an average over the last 3 years. So, when an employee stops his working day, a fisherman, after his hard day at sea, has to start filling out forms and grant applications. He is also an entrepreneur and thinks about benefits.

The longer we are at sea, the more we make benefits, but if we have to devote 2 days a week doing paperwork, it is not sustainable
Alexandre Lucchini, Corsican fisherman

When pleasure fishing threatens the work of fishermen

On the 5th of June, we celebrate the International Day for the Fight against Illegal, Unreported and Unregulated Fishing. This date was chosen to recall the entry into force, on 5th June 2016, of the Agreement on Port State Measures to Prevent, Deter and Eliminate Illegal, Unreported and Unregulated Fishing (adopted by the Food and Agricultural Organisation of the United Nations (FAO) in 2009). If this agreement mainly targets foreign vessels, the real threat for Corsican fishermen is the abusive practice of fishing by boaters. The latter are not subject to quotas for pelagic species and do not need an AEP license. So, when a professional fisherman sees that a yachtsman is better equipped and fishes more during his weekend than a professional fisherman´s working week, and sells the fish on the black market, there are good reasons to give up.

This is the case of the dentex fish which has become a hot topic among fishermen on the island. Measures have been taken to limit this fishing among boaters, but we still need to have the means to ensure that they are applied. On the one hand, the maritime controllers are understaffed. On the other hand, it is much easier to control a professional fisherman than boaters on holidays.

Pescatourism, the future of professional fishermen?

Alexandre Lucchini adapts to the changing world and seizes the opportunities that arise such as the FISH MED NET project to start diversifying his fishing activities. He takes tourists on board for a sea trip. He introduces them to his job, makes them aware of the marine environment and its reality as a fisherman. He would like to set up an auberge bleue in which he could welcome his visitors after their sea trip and proudly serve them the fruits of his labor.

When he takes visitors on his boat, he changes the type of category and hence the type of authorisation, so he must stay closer to the port and follow a strict security plan (much stricter than the neighbouring countries). Despite this, he sees in this activity, an opportunity both in terms of consumer awareness and in reducing his cost (the price of the ticket per visitor covers diesel, bait, etc.). Of course, he fishes less but fishes better. If we can serve the fishes we caught the same morning with visitors at a fairer price, we will not be obliged to sell our fish to restaurants at a price that will be resold twice once cooked.

Flexibility, pooling and diversification: some thoughts to improve the lives of fishermen

Regulations are necessary to preserve this threatened resource, but too many restrictions sometimes seem counterproductives.

There is an obvious lack of sailors and fishermen. Changing the period of internships for students in training to allow them to live the fishing experience and give them the spark for the job should not be very complicated.

Creating structures such as cooperatives to help fishermen with their administrative procedures should also be a way to explore. There are already some initiatives, but they are not enough.

Finally, the diversification of fishing activities should be facilitated to fishermen.

Being a fisherman: it is exhausting but pleasant

Despite all these difficulties, for Alexandre, being a fisherman, is worth it. Every morning, he enjoys finding his boat in a beautiful setting (the best office view you can have). His job is obviously tiring and physically exhausting, but gives him a feeling of well-being, a psychological relief that is precious these days in a world that is going at full speed and which makes people stressed. In the evening, he has no trouble falling asleep. Finally, before going out to sea, Alexandre shares a final message: you have to shift prejudices about the profession of fisherman and make up your own mind before starting.

Business
Environment
Programme
Back to news