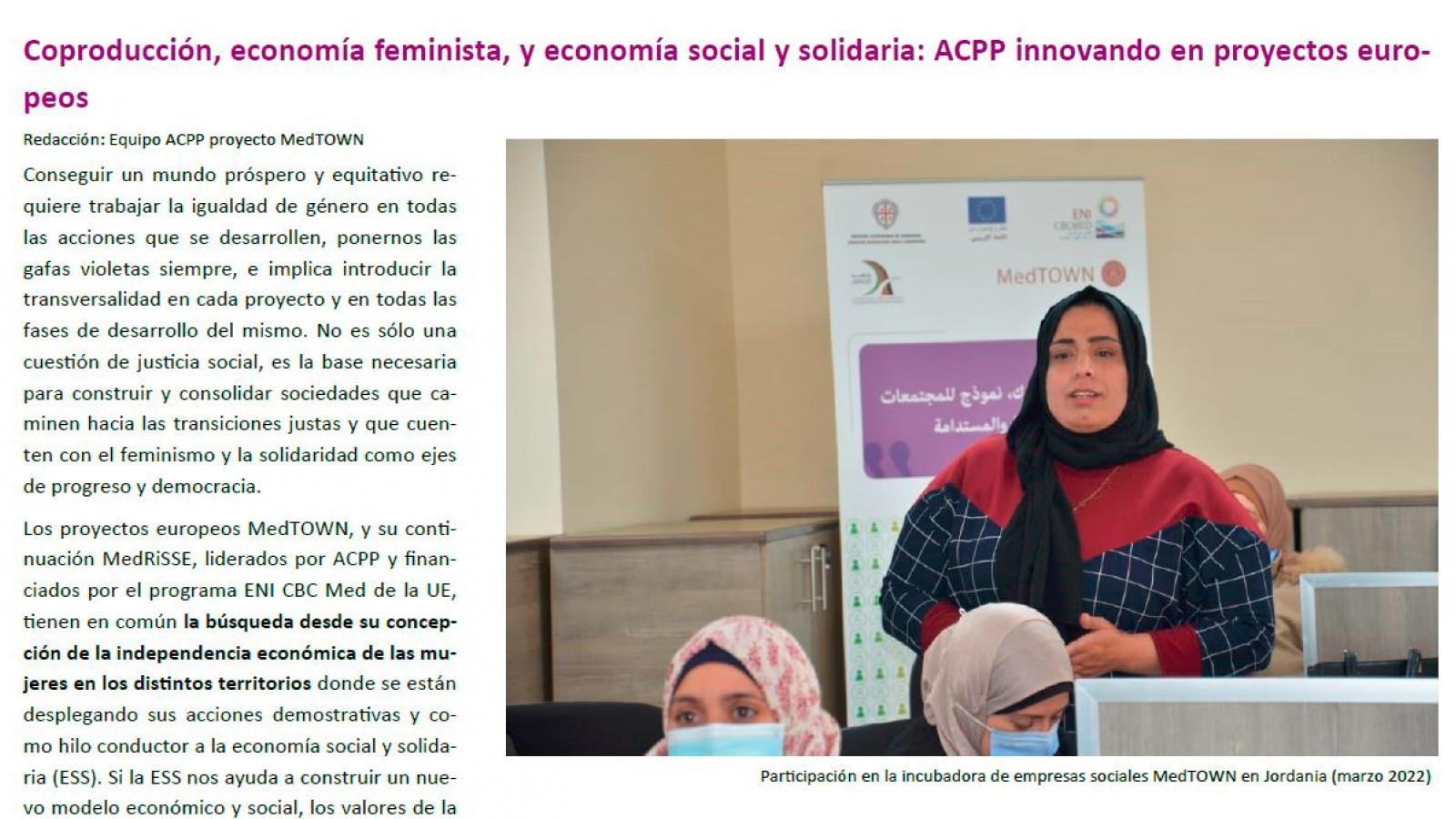 On the occasion of March 8th, International Women's Day, this article reflects on the interrelation between the concepts of co-production, feminist economy and social and solidarity economy, concepts which are all considered in the innovative MedTOWN project.

Achieving a prosperous and equitable world requires working for gender equality in all actions, always wearing our purple glasses, and it implies introducing gender mainstreaming in every project and in all phases of its development. It is not only a question of social justice: it is a necessary basis to build and consolidate societies that move towards fair transitions and that count on feminism and solidarity as axes of progress and democracy.

MedTOWN looks for the economic independence of women in different territories where our demonstrative actions are being deployed and where the social and solidarity economy (SSE) is a common thread. If the SSE helps us building a new economic and social model, the values of the feminist economy applied to the same ecosystem lead us to build a welfare state that guarantees rights, freedom and higher levels of satisfaction and more labour, political & social justice.

MedTOWN 'Co-production of social policies with SSE actors to fight poverty, inequality and social exclusion' has already implemented demonstrative actions with a gender perspective in Jordan and Portugal, and begins in Tunisia. The Jordanian project was launched in March 2022 with the question "How to develop a social and business plan for your small project?", in which Syrian and Jordanian women discovered the SSE and began cooperating in the MedTOWN social business incubator.

In Portugal, we began a year ago with the commitment to syntrophic agriculture, to develop a process of social participation in one of Lisbon's peripheral neighbourhoods that is serving to build a new model of city and community from a feminist perspective, and where the circular economy serves as a driving force between citizenship and public administration.

In Tunisia, the creation of the 'Female Force Studio', a training and coworking space is under development as a safe environment where women can learn new skills, work, market their products/services, as well as inspire other women and advocate for better economic rights.

MedTOWN work is succeeded by MedRiSSE project 'Replicable SSE innovations in the provision of services and the creation of decent jobs in the post-crisis recovery Covid-19'.

A version of the article was published on April's newsletter edited in Spain by Asamblea de Cooperación por la Paz (ACPP), MedTOWN project lead beneficiary,  to report on the most important activities carried out by the organization around the world during the previous months.

You can read the complete article (in Spanish) at this link.

More info: at our community of practice platform: https://cop.acpp.com/
or contact us through: medtown@acpp.com