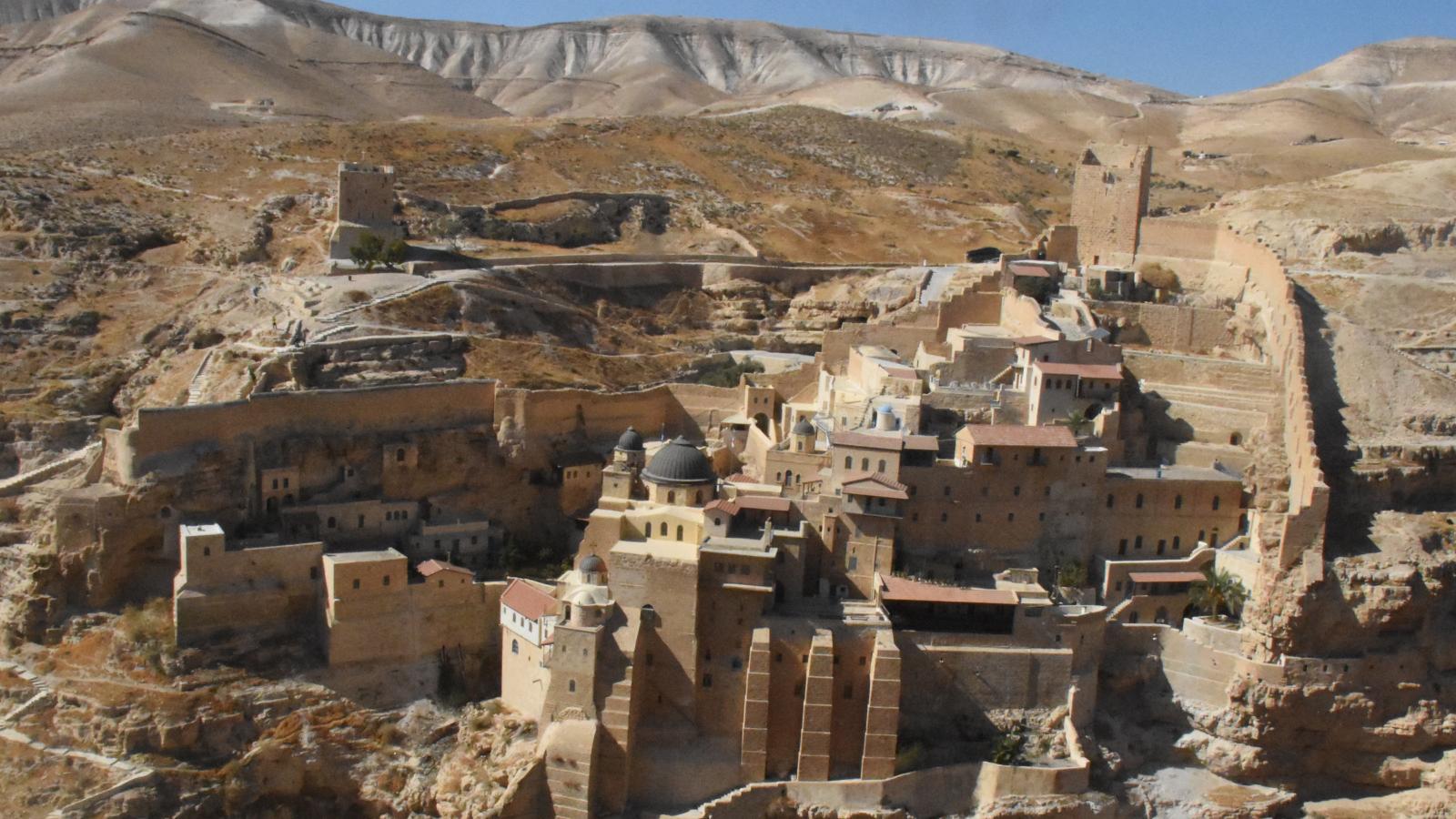 Jerusalem Wilderness a breath-taking region in Palestine composed by an array of hills and canyons that fall from heights of around 1,000 meters, in the Jerusalem Mountains, into the Dead Sea at -421 meters below sea level -the lowest place on earth. At its eastern edge, Jerusalem Wilderness dramatically drops into the Dead Sea in cliffs of up to 500 meters, and waterfalls in the dry canyons fall from heights of 50-330 meters. This impressive cliff line was created as a result of the Great Rift Valley and the movement of the tectonic plates that also created the Dead Sea valley.

When travelling to the region, travellers will discover the unforgettable views of the contrasting yellowish-brown colours of the land, with the cloudless intense blue skies.  Furthermore, the area is home to small lizards and desert beetles that hide among the rocks of the uneven terrain. There are not many trees that grow in the region, but some can be met along the beds of periodical rivers that are active for short periods of time during the rainy season. On the east, the sharp cliff of the wilderness meets the shores of the Dead Sea, creating a breath-taking view from the cliff down to the blue azure water of the sea.

Close to Jerusalem Wilderness we find the important city of Bethlehem. An Arabic city with a long history that was established and inhabited by the Canaanites around 2000 BC, and was called Beit Eilo Lahama, which means “house of the God Lahama,” who was the god of food and sustenance. The city's name in Arabic also indicates a food meaning: house of meat. It is said that the reason for its name is that cattle and sheep used to breed and graze there, due to the large number of fertile and grazing lands. On another hand, the city is located between the cities of Hebron and Jerusalem and extends over two plateaux above 750 meters above sea level, which is part of the mountains and central plateaus of Palestine that spread parallel to the Jordan Valley and the Dead Sea.

Jerusalem Wilderness is also part of a protectoral area inhabited by Bedouin that come from the Arab Al Kabna’a, Hathaleen, Jahaleen and Al Rashida families. While some of them travel from place to place looking for fresh water, others stay at this area all the year-round and end up becoming citizens and farmers of the region. The region where they live extents from the south-east of Bethlehem to the south of Hebron and reaches the mount that surrounds the Dead Sea. There, some of its valleys like Ra’as Al Hemar are considered one of the most beautiful landmarks of the region. Furthermore, Jerusalem Wilderness also has interesting Byzantium and Roman monasteries that were built in the past, still preserve some of ancient mosaics and are worth visiting.

Travellers exploring it will be able to enjoy many activities such as overnight stays in the Bedouin battalions and their dwellings, trips by four-wheel vehicles, bicycles, or mountain cars, or attending concerts of bands such as the orchestra "Kamandjati". They will also be able to discover the rich gastronomy of the region with local families or wander at the sunrise on the peaks of the Dead Sea Mountains.

In conclusion, Jerusalem Wilderness is a beautiful and worth visiting destination in Palestine that allows traveller to discover from the impressive cliffs and canyons to the Dead Sea, the different Bedouin tribal areas such as the Arab Al Jahleen, Al Rashaida, Al Kabana or Al Hathaleen, and the important city of Bethlehem. An array of contrasting and insightful activities that will sure bring memorable travel experiences for all kinds of travellers. Without a doubt, a breath-taking region that you should explore!