COMMON ‘BEach CLEAN’ campaign, a bond between the sea and its operators 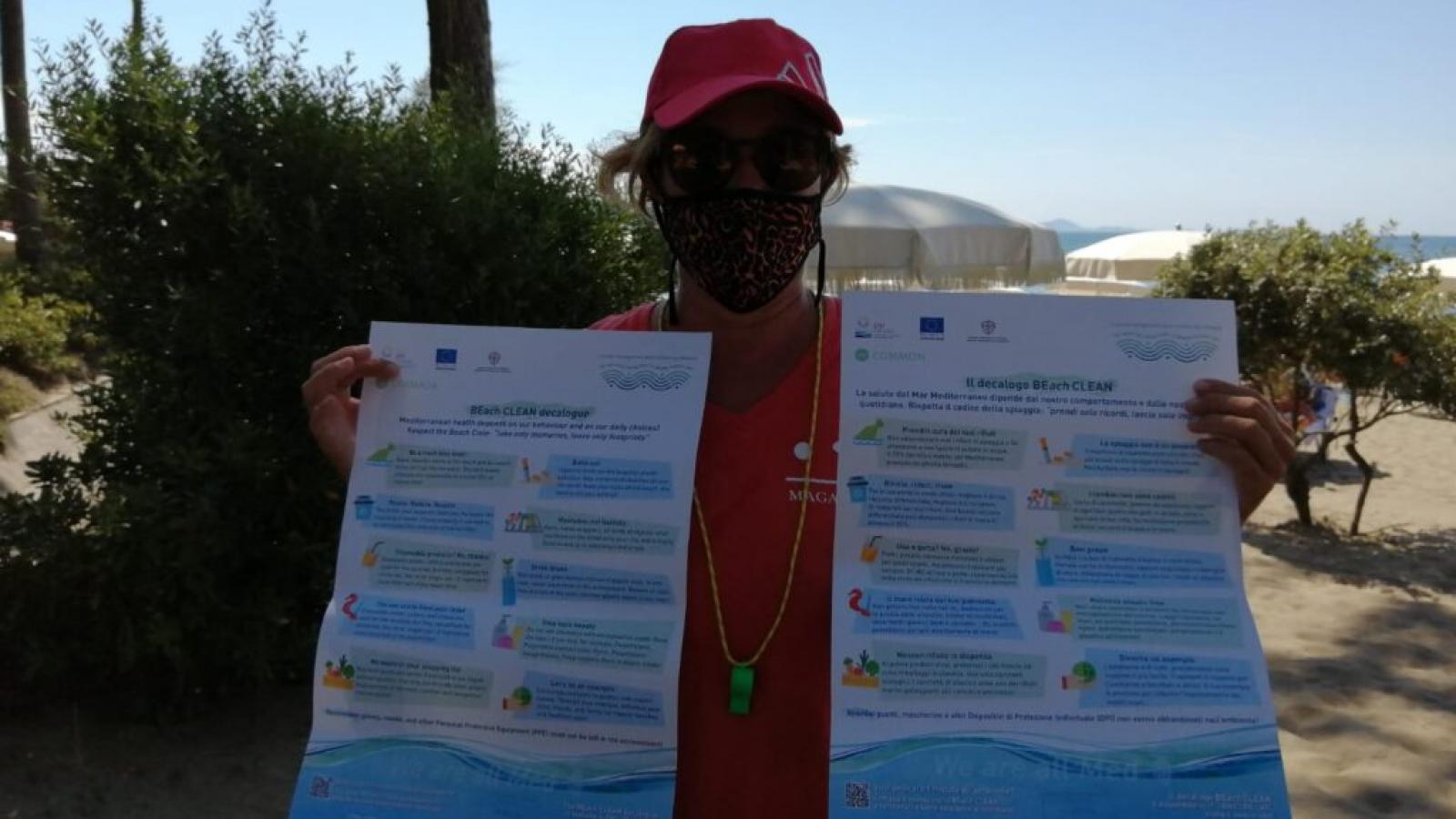 The BEach CLEAN is back, the awareness campaign to address the emergency of marine litter on Mediterranean beaches. The initiative, promoted by the EU-funded COMMON project, starts the 1st of June and will last until the end of September. The BEach CLEAN campaign stems from the need to protect the beaches environmental heritage and promotes a productive dialogue with the tourist operators and with citizens, starting from the sharing of a decalogue with ten good practices to follow for a correct waste management and to raise awareness of the consequences of waste abandonment.  This year, the ten golden rules proposed in the decalogue, in poster format, will be posted in the main Italian, Lebanese and Tunisian tourist and bathing establishments. Places that generally undergo a remarkably high tourist influx during the summer season, and whose coasts see the percentage of waste beached increasing, day after day. During the summer season, in fact, seaside tourism increases the marine litter issue by more than 40%.

Last year the campaign involved 80 structures, including resorts, hotels, bed and breakfasts, and other tourist facilities linked to the Tunisian, Lebanese, and Italian coastal areas. Specifically, the BEach CLEAN involves five different areas of the Mediterranean: Maremma and Salento in Italy, Kuriat Island and Monastir in Tunisia, and the Tyre Coast Nature Reserve in Lebanon, with the aim of promoting sustainable and inclusive bathing establishments, places that know how to improve respect for the environment and guarantee tourists and visitors the opportunity to live the beach responsibly.

The bathing establishments that will take part in the initiative, in addition to the posting of the decalogue in the tourist places of competence, will be called to take part in a survey, to be completed at the beginning and end of the summer season, aimed at knowing and analysing the health conditions of the beaches overlooking the Mediterranean, and to improve the relationship between tour operators and the ecosystem.
From the analysis of last year's surveys, it clearly emerges that the problem of beach litter is global and connects the three countries involved in the campaign: the most found material on the beaches of all the bathing operators involved is plastic, which represent the 81% of waste found on Tunisian beaches, the 56% of waste observed on the Lebanese beaches and the 80% of waste found on the Italian beaches. The most common waste in Lebanese and Tunisian beaches are plastic bottles, followed by cigarette butts, which is the most common waste on the Italian beaches.

The data collected by the bathing operators are in line with what was reported by tourists and residents in Mediterranean coastal areas who took part in the BEach CLEAN survey dedicated to them: a survey aimed mainly at strengthening the link between tourists and bathing establishments in a perspective of sustainability. 200 responses were collected from tourists and residents from 9 different countries: Italy, Lebanon, Tunisia, Algeria, Morocco, Spain, France, Holland, Albania, and Latvia. Also in this case, the most found waste are cigarette butts (37%) and plastic fragments (35%), followed by cotton swabs (6%) and pieces of polystyrene (4%). 30% of respondents noted the abandonment of PPE, and only half said they always take care to dispose of them correctly. Furthermore, 66% declared that tourist facilities have not adopted special measures to prevent the dispersion of PPE in the environment.

In addition to the lack of individual attention, there is a need to strengthen local and national awareness-raising actions and policies aimed at reducing marine litter: 64% of respondents say they are not always careful to separate waste, and 32% declare that in locality tourism is not possible to differentiate easily. Finally, 71% think that the collection baskets along the beaches are not enough.

A questionnaire will then be dedicated to tourists also this year, to learn about the habits related to their daily waste management and to analyse the main difficulties related to their correct disposal. All interested tourists can talk about their relationship with the sea here. In addition, in this summer marked by the emergency and the rules of distancing, sustainable tourism also passes by the correct use and disposal of personal protective equipment, such as gloves and masks, whose abandonment in the environment is increasingly reported even in the coastal areas. The BEach CLEAN campaign aims, among others, to assess the presence of these 'new wastes' on the selected beaches, and to raise awareness of their correct management.