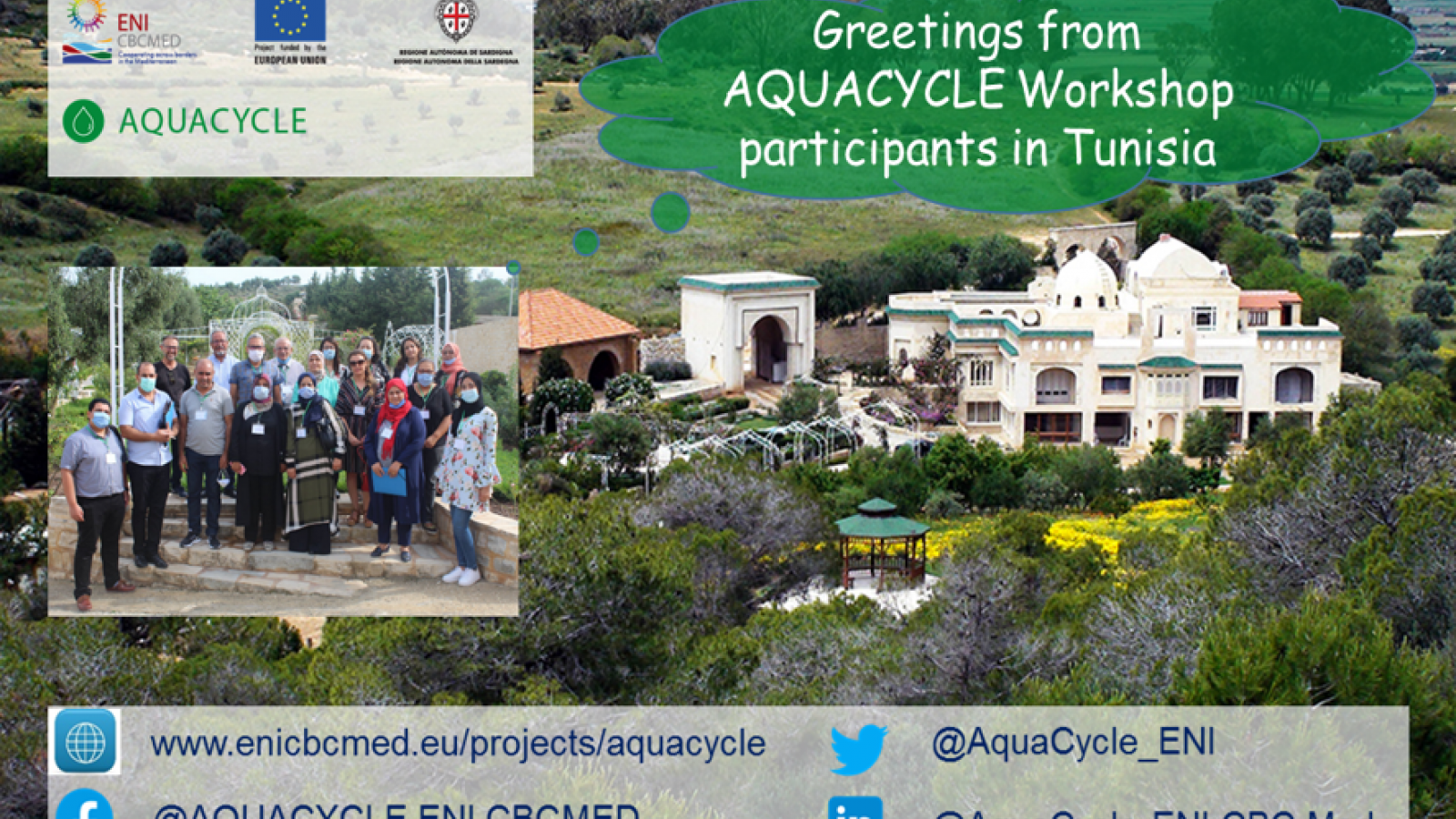 No less than 5 ministries as well as 6 institutions involved with the use of non-conventional water resources were represented at the first stakeholder workshop in Tunisia which took place on 22 September 2020. They were joined also by representatives of municipalities and several non-governmental organisations.

In addition to the radio interviews provided by the Teamleaders of AQUACYCLE partners CITET and CERTE in respectively French and Arabic in the run up and shortly after the event, journalists from El Biaa News and News Plus were present to cover the event in the Tunisia media.

The workshop took place in the popular and expertly maintained thematic gardens of the Ecological Group for Sustainable Development (Groupement de Développement Agricole, GDA Sidi Amor). Among other, the site boasts a medicinal garden, a forest garden, a cultural garden and a rose garden.

Organized on the Theme “Changing the paradigm of wastewater reuse”, the agenda of the event (in French) adopted the same template as the workshop which took place in Tripoli, Lebanon on 25 July 2020.

The event kicked off with a presentation by Ms Samira Rafrafi who introduced the ENI CBC Med Programme in her capacity as the Tunisia National Contact Point for the EU funded programme. Mr Fadhel M’Hiri (CITET) then placed the event in the context of the importance of reuse of treated effluent in water scarce regions.  Before going into the more detailed presentations of the AQUACYCLE project itself, the floor was given to introduce related projects which are also funded under the ENI CBC Med Programme Priority ‘Water Efficiency’. Ms Latifa Boussalmi and Ms Hela Hassairi, both from CERTE, presented the NAWAMED project while Ms Yousra Akrichi from the National Sanitation Utility (ONAS) presented the MENAWARA project. The involvement of Tunisia also in the MEDISS project was presented by Ms Saifeddine Eturki from the Institute for Arid Regions (Institut des Régions Arides (IRA) de Médenine).

Presentations introducing the scope and objectives of AQUACYCLE, the outcomes of earlier interviews with stakeholder in Tunisia, and the respective role and functioning of the 3 components of the eco-innovative wastewater treatment technology (APOC) were delivered by respectively Ms Mensi Khitem (CITET), Dr. Hamadi Kallali (CERTE), and Mr Mohamad Ali Wahab joined by Ms Bahaa Chamam (CERTE).

In the third and last session of the event, the prototype WebGIS that will serve the drawing up of wastewater reuse action plans was presented by Dr. Hamadi Kallali (CERTE) and Ms Mensi Khitem (CITET).

The latest video now available on the dedicated AQUACYCLE Channel on YouTube brings greetings from the participants who joined the first stakeholder workshop in Tunisia.

Hope you enjoyed watching, and please do not miss out on our next video clips by subscribing to our channel!