The Jordan Trail is a long distance hiking trail in Jordan from Um Qais in the north to Aqaba in the south. The trail traverses the diverse landscapes and vistas of the country, like the wooded hills in the north, the rose rock of Petra, towering mountains in Wadi Rum, finally finishing at the wonderful beaches of the Red Sea. It is a journey through the history and diverse culture of Jordan you can see the different layers of culture, taste the varied cuisines of Jordan, meet locals while walking, it is also an opportunity to learn more about Jordan. The Jordan Trail embodies the essence of the Jordanian outdoors. It flows alongside the Great Rift Valley, overlooking rugged wadis and cliffs, and breathtaking scenery and archaeological monuments portray the layers of Jordan’s rich history, heritage, and religious relevance.

In the most northerly and greenest part of Jordan, the hills and canyons are packed with the ruins of many ancient civilizations. The fertility of the hot Jordan Valley, the grasslands on the hills above it, and the oak forests of the highest mountains provide an enchanting natural backdrop to the trek between historic sites from the past two millennia and beyond. Hot springs, huge ancient olive trees, caves, mysterious prehistoric structures, Roman cities, and villages pioneering community-based tourism are some of the attractions of this northern corner of Jordan.

This region weaves through farmland and a spattering of rural villages as you leave Ajloun and its hilltop castle behind. The trail crosses King Talal Dam, before ascending a hilltop following rich farmlands to the village of Rmeimeen with its beautiful church spire and minaret. Winding down through fertile valleys, the trail reaches the historically fragrant city of As-Salt. 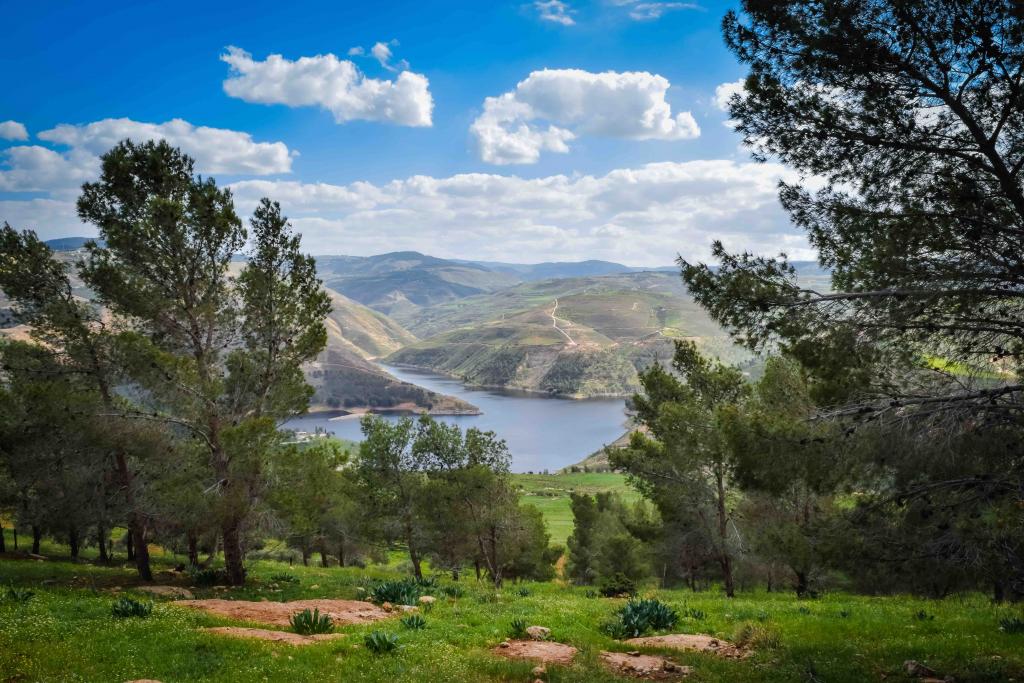 Here you leave the more northern regions and Amman behind and head towards the Dead Sea. Walk past the ancient palace of Iraq Al-Amir before descending along the spectacular King Hussein’s Rally Road to the Jordan Valley. The climate and scenery changes as the Dead Sea looms from a plateau and Bedouin camps scatter the path. The trail now follows a roman road, encountering basalt cliffs and Wadi Zarqa Ma’in with its year-round stream.

Through this region on the trail, you encounter some of the spectacular Dead Sea wadis mainly Wadi Zarqa Ma’in, Wadi Al Hidan and Wadi Al Mujib, which is one of the grandest Wadis in Jordan. Fertile farmland with rich red soils and Bedouin tents create a dramatic landscape. The ruins of Majdaline leads you to Wadi ez-Zaiyatin that takes you to the imposing crusader castle of Al-Karak, impressively situated to overlook the surrounding landscape.

The crusader-themed landscape continues in this section as you exit Karak passing the old crusader village of Shehabieh and the abandoned village of Khirbet Ainun. Orchards and olive groves grow abundantly through fertile plains. Crossing another Dead Sea canyon, Wadi Hasa, the landscape becomes a series of towering limestone cliffs and ridges before reaching Edomite ruins at Sela and Al-Ma’tan. After moving on through the deep Wadi Labun, the trail turns to easier terrain as it passes over the next hill to the restored village of Dana, its hotels and campsite resting on the rim of Wadi Dana at the edge of the Dana Biosphere Reserve.

This region descends the hilltop village of Dana into Wadi Feynan and onto the dramatic mountain plateaus of Wadi Araba. This region crosses several climate zones, diverse ecosystems, hidden canyons, and dramatic labyrinths of hills and valleys displaying the full spectrum of the region’s geology. The scenery spans from majestic and epic mountaintops to peaceful, fertile farmlands with new landscapes presenting themselves every few kilometers. This trail most dramatic and memorable aspect is entering the Nabatean capital city of Petra through the footsteps of ancient traders.

Connecting the two legendary sites of Petra and Wadi Rum is a week-long trek across one of the longest stretches of wilderness on the Jordan Trail. Here in the empty but striking desert, with its dramatic rock formations, stargazing, and peace are found at their best. Starting with deep, rugged wadis and moving into open and sandy plains, this region of the trail takes you deep into the places where humans seldom go. Finishing at Humeima ruins label this stretch as the most pristine with the most unique cultural element on the Jordan trail.

As you enter Wadi rum, the trail passes beneath the towering cliffs of Jabal rum and Jabal Um Ishrin through the iconic landscape of Wadi Rum. The trail passes the cliffs of Jabal Khazali, Jabal Qattar and weaves between the unique and colorful backdrops of Wadi Rum’s sandstone Desert mountains. The trail here follows old caravan paths, heading west across desert wadis and over Granite mountains striated with basalt dike intrusions. At the last camp, the first view of the red sea, beyond which lie the mountains of Sinai. The final destination is the warm water of the Red Sea. 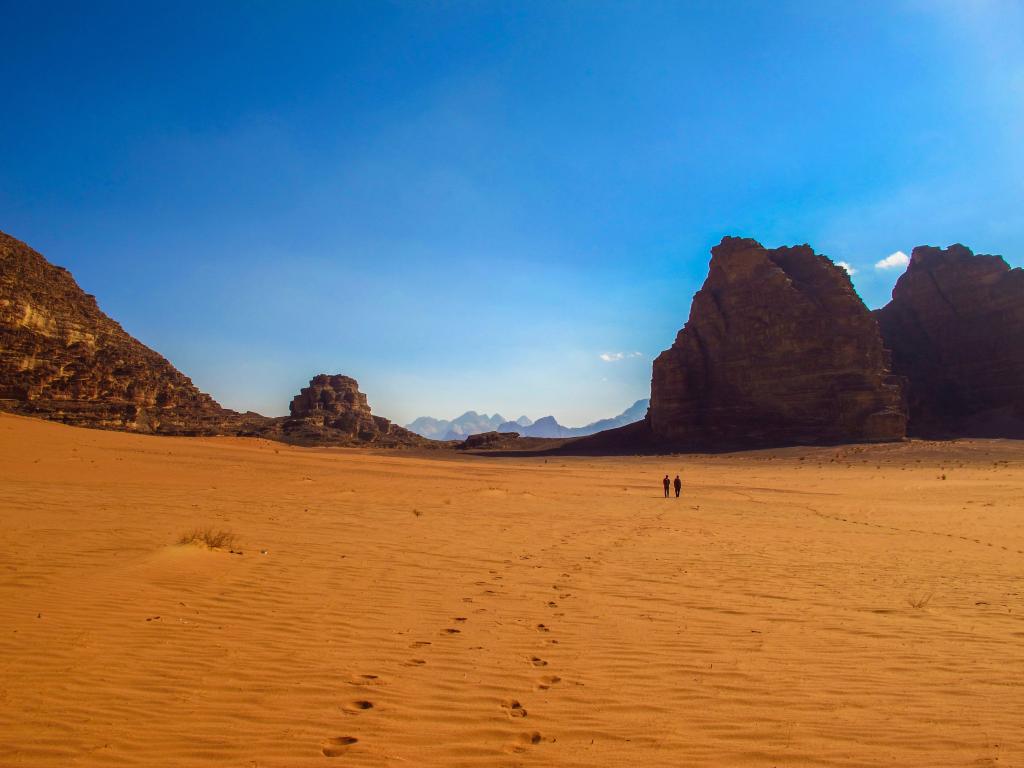