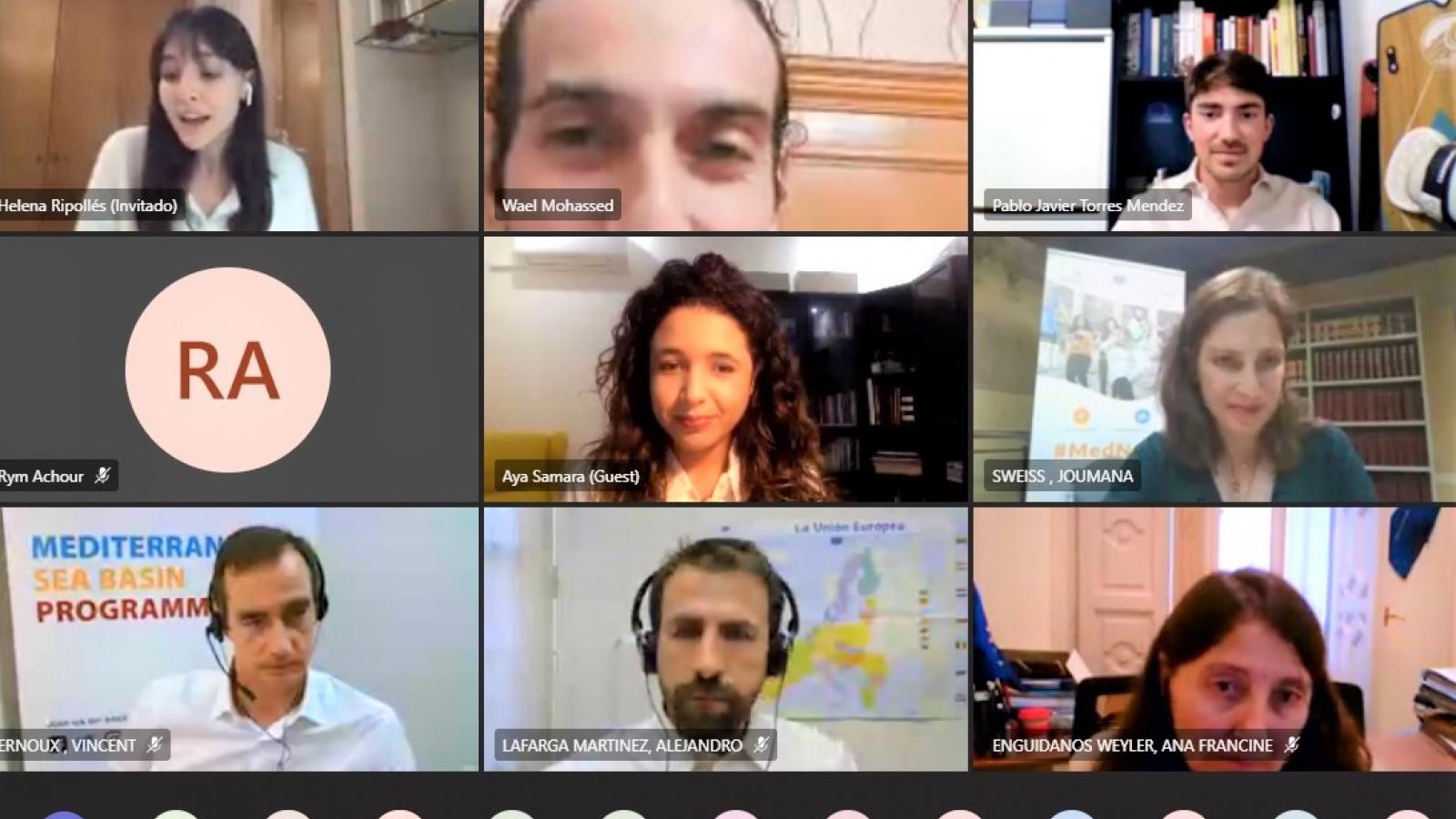 On December 10th, the ENI CBC Med Programme and the office of Europe Direct in Valencia (Spain) organized a debate between young people from both shores of the Mediterranean to reflect on how to “Build the future of Europe with our Mediterranean neighbours”.

Up to 42 people participated in this online event which started with an overview on the European Neighborhood Policy presented by the coordinator of the ENI CBC Med Branch Office in Valencia, Mr. Vincent Ernoux. Then a quiz was launched to test participants' knowledge of the Euro-Mediterranean region. This was followed by a debate between Helena and Pablo, two young people from Valencia with three neighbours from the Southern Mediterranean: Wael (Egypt), Rym (Tunisia) and Aya (Jordan).

How would you like to see the Mediterranean region in 25 years?

To this question, all agreed that they hope to see the Mediterranean area with greater stability, better social convergence and more equality.

Helena, Pablo, Wael, Rym and Aya dream of a future of peace, societies in which citizens live with more social justice, more dignity and more solidarity. They dream of seeing this region shining again as it was before: an area of cultural and commercial exchanges with historical ties that unite much more than they divide.

These dreams go with real life too: "if people don't have enough to eat, they can't choose, because our freedom of choice depends on our economic power," said Pablo (Spain).

This answer leads us to the second question about the most relevant cooperation priorities between Europe and its southern neighbors.

First, addressing youth unemployment. According to Aya (Jordan), job creation helps families to get out of poverty in a dignified and sustainable way. She added that employment gives women a more powerful voice in society and within the family sphere.

Thus, we connect with the second priority: gender equality to which Rym (Tunisia) attaches great importance. You cannot talk about independence, freedom and equality of women without economic independence.

Third, the fight against climate change. From Wael (Egypt), who shared his concern about the amount of plastics in the Mediterranean Sea to Helena (Spain) who reminded us that: “if we don't have a physical environment to live in, we cannot fight against the rest of inequalities”. The environment is clearly on everyone's mind, knowing that it will have an impact on quality of life, something that is highly valued and for which the Mediterranean is known: enjoy a high quality of life.

If we don't have a physical environment to live in, we cannot fight against the rest of inequalities.
Helena, Spain

What question would you like to ask your neighbours from the North/South?

"If you were the president of a European country, what would be your first measure regarding the Mediterranean?" To Wael's question, the northern neighbours answered the following: I would organize a conference between heads of states of all the Mediterranean countries to establish an equal relationship, identifying the reasons why they are not cooperating more and reflecting on the way in which these relationships could be improved.

During the debate, participants agreed that ignorance and prejudice were among the biggest barriers to overcome in order to foster mutual understanding among people from the Mediterranean. Eventually, everyone around the Mediterranean aspires to live in peace, to have a decent, sustainable and enjoyable life.

So, what next? Organize more debates like this one to combat prejudice and break the barrier of ignorance.

برنامج
Back to news